This viewer from Brazil is called a VIVO. It is made from plastic and the only markings on the body are "Estereovisor VIVO Ind. Bras." The two halves of the viewer body are held together by a single screw located beneath the viewer. It gives a good clear image, but is better suited to non-spectacle wearing users as it has slightly contoured eyepieces.

It takes Stereo Realist format 5P (5 perforation) slides. Found with it was a slide containing a view of a young couple's wedding, presumably in Rio de Janeiro, where the viewer was found.

Nothing more is known about this viewer and it cannot be accurately dated, but from the clothes of the people in the photograph it is assumed to be in the 1970's

Slide with 'snap together' photo holder 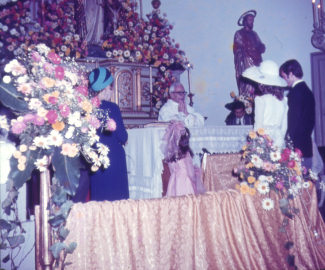 Thanks to Leo Vasconcellos B. Maluf of Rio de Janeiro, Brazil for finding this viewer for me