This little cardboard viewer was made probably in the 1960's as a promotional item for the OXO brand of food products. The viewer itself was manufactured in Japan under patent number 441681.

To open the viewer the user pulled on a string which caused the viewer to expand by pulling side supports into place. To fold the viewer after use the user simply pushed the sides back in.

The slides are realist format and each image measures 21 x 23mm. The film stock used was not good quality and so the slides have lost their colour over the years and now have a magenta hue.

The sets of slides had titles in French and Dutch, some are religious in nature (la procession du saint-sang a bruges), some are about birds (les oiseaux dans leur cadre naturel), some about the Canadian Far North (Le Grand Nord Canadien). Some of the slides suffered from fairly bad stereo alignment, but the majority are acceptable.

The viewer seen folded flat, together with one of its slides 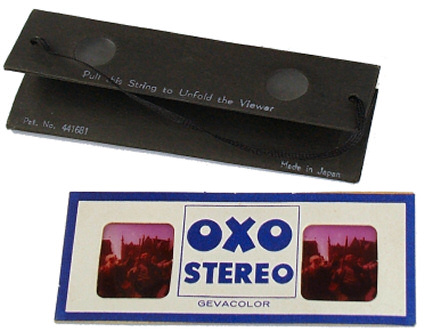 A scene taken from one of the slides in the set "Le Grand Nord Canadien" entitled "auto-ski devant la banquise", which translates to "car-ski in front of the ice-barrier"

(Use the cross-eyed viewing method) 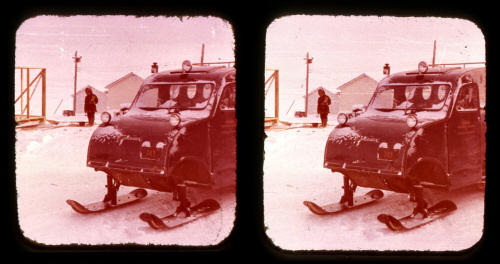