View-Master Reels consist of a disk 9cm in diameter. Each disk contains 14 pictures, which comprise of 7 stereo pairs. Sawyers and Gaf reels used Kodachrome film and the colours last very well, even after 60 years. 99% of all reels were made either in the USA or Belgium. Very small numbers were also made in India, Australia, Austria and France, but they are all fairly rare.

A great many variations exist of colouration and label lettering. There are in excess of 60 different label styles that can be found on View-Master reels. As well as that, the colour of the reels has changed though their history. early reels were blue with gold labels, then there were buff reels,  yellows, blues but the bulk of reels are white. Gold centre reels fetch a high price when compared to their tan, white and blue ring equivalents.

click here to see a Receipt dated 1946 for Reels

Most View-Master reels are fairly inexpensive, making collecting them a great hobby, however, there is one reel which is the 'Holy Grail' of hard-core View-Master collectors and that is reel 1305, President Kennedy's Visit Ireland June 1963. The reel was on sale for a very short time because it was withdrawn after Kennedy was shot on the 22nd November 1963. For this reason there are very few in circulation. During 2005 a few surfaced and these sold for £180, £186, £294 and £310 respectively, three of them via eBay.

Click the links below to see some scans of View-Master Reels. The scans are named starting with the reel number and followed by the frame number on that reel.

A pair of View-Master Cufflinks

Thought to be given as a reward to salesman for achieving their sales targets. 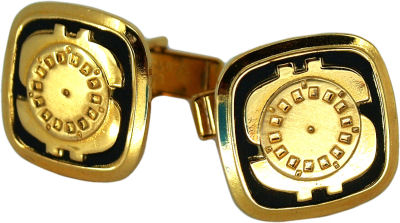