View-Master Promotional Models - Based around the Model L ViewMaster

The View-Master Model L has been used extensively for advertising and promotional purposes. It is still in production today and specialist reel manufacturers supply it with custom produced reels.

This Model L is an ebay branded 3-D View-Master complete with a reel of ebay's "Behind the Brand" showing highlights of ebay's brand campaign launch from November 11, 2002 - "Do it ebay".  The reel shows several shots from the print campaign.

This is cool piece of ebay history, designed to generate excitement inside the company about the ad campaign.  This item was not available to the general public.

Ebay has played a significant role in popularising the collecting of Stereo Viewers and Reels. Many items that were either unknown or hard to find have become accessible to everyone through their online auction site.

Model L View-Masters have been used extensively to promote other brands of goods.

Below is a Model L in shocking pink bearing the Barbie brand name. This was available in a boxed set with three Barbie reels.

The item below is a slide-rule that was given as a promotional aid to potential and established View-Master dealers. These were handed out in their thousands in the 1950's, but are almost impossible to find these days. 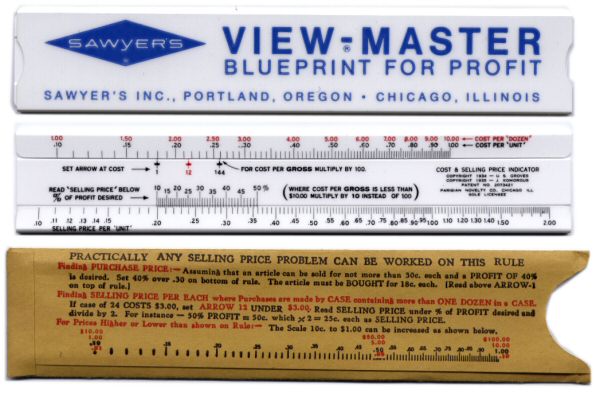 Although this looks like a Model L it actually isn't, it is a Chinese rip-off version, but that doesn't detract from the package put together by software company PAS. The reel included with the viewer tells of  Super IntergrityMan's quest to supply tools to an fictional engineer, Joe Thomas, to assist him with his process automation.