The Mikro-Kino viewer was manufactured in Finland sometime between 1950 and 1960 in Helsinki, Finland by a company calling itself Mikro-Kino Kommandiittiyhtiö . It was an almost exact copy of the American Tru-Vue viewer from the 1930's. The actual viewer had no markings on it whatsoever. The face of the viewer had a white metal plate in crackle finish, held in place by five brass screws. The rest of the body was made from hard plastic.

The filmstrips that were available for it came in two different lengths, those being 16 and 32 frames each, all were black and white. A lot of the subjects covered by the films were to do with Finland, such as the Helsinki Olympics, but a number were about other countries, such as India, Russia and  Switzerland.  Other topics covered were boxing, car racing and children's stories 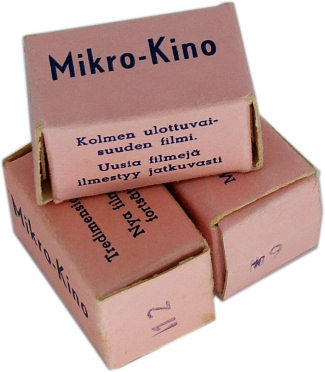